Quinn here. I know that this is usually Bryan’s forum, but I’m taking it over for a bit to dispense some information.

First, I want to thank all non-England based followers of our Twitter feed for their patience regarding the barrage of information flowing through there about the Space Monkeys Jolly Ol’ England Tour. I know I’ve been hitting it hard with info that’s largely useless to you, but it will pay off for everyone in the long run. See, if this England tour is a success (and it already is) then I’m going to have an easier time setting up shows in the good old USA. I may not be able to get Walt on a plane, but I can get him in a car if I show him that we can actually pull this off. I crave his approval.

Yes, Walt has morphed into some sort of bizarre father figure for me.

So, hold tight, USA. Once these shows sell out (fingers crossed) then it’ll be back to business as usual, i.e. hitting on women with nice looking profile pics and spending an inordinate amount of time and energy corresponding with people who say that we suck.

Okay. That’s the Yanks sorted out. Now onto the Limeys…..

Good news, everyone! We sold out London and Manchester! Paul at the Prince Charles Cinema in London and Graham at the Fab Cafe in Manchester have worked tirelessly to make this happen, and the response has been more than we hoped for.  So much so that Bryan and I have added shows. These shows are:

2) A September 19th show at the Fab Cafe in Leeds.  Yes, Leeds.  I will not be wearing any Manchester related kits in Leeds. You can secure your tickets by calling the good people of the Leeds Fab Cafe at 0113 244 9009. Tickets will be £15 a pop there.

To answer a question we’ve been getting a lot – Yes, we will be selling t-shirts at the shows. TESD shirts. Space Monkeys shirts (Bryan is working on a special tour version of this). We will also be selling tour posters. A small, but respectable merchandise table, I think you’ll find.

Another frequent question is one about whether Bryan and I will be hanging out after the shows.  To this, I reply an enthusiastic YES!  Allow me to break it down for you –

LONDON – We have a show at 7pm at the Prince Charles Cinema. After the show we will be walking across the road to a nice joint called Ruby Blue where we will begin the fine art of getting blottoed. Ruby Blue has been kind enough to host us, and you will only be able to get in with your ticket stub from the show, so hold onto it. Entrance is free, but, sadly, we need to pay for drinks. You can get in with tickets from either of the London shows, so don’t worry about that.

At Ruby Blue, Bryan and I will be in attendance, fluttering and (in Bryan’s case, of course) hitting on your wives and girlfriends. It’s gonna be a blast. A blast that leads to the alcohol-fueled midnight show. Midnight Madness, I’m calling it. I’m hoping for a much more interactive, Rocky Horror type show for the midnight hour, but that’s just me. Bryan may just be hoping for me to stay awake and not fight with the audience, Houston style.

MANCHESTER – Fab Cafe in Manchester is shaping up to be the frat party that I’ve always wanted. First, it’s in a bar. Boom. Second, it looks like some Irish lasses are going to come over and act as the Space Monkeys Cheerleaders. This isn’t a definite, but if you listen to the last Overkill, you know we tried to set it up. Any girls interested in joining in, let me know. Third, we will be walking right from the stage to the bar to hang out, and Graham says we can go as late as we want. So we will be going late. I feel like Manchester is going to be the Thunderdome of this tour. Finally, the place looks like the comic book store, so Bryan and I will be right at home. It’s got a ton of cool, geeky movie memorabilia all over the place.

I’ve been to the Fab Cafe in Manchester back in 2009 and can attest to the fact that it’s a fucking lovely place to spend an evening.

LEEDS – Fab Cafe in Leeds just went on sale as I type this, so tickets are very available. This is it. The end of the tour. Our deportation party. Anything left that we have, we’re going to leave right there. At this point we have no reason to hold back anything, so come down and watch two middle-aged men burn out. After being attached at the hip and going hard for four days, we should have a lot to complain about each other and, really, isn’t us bitching at each other what brought us all together in first place?

There we go. One final thought is this – many people have expressed concern about coming alone to the shows. Do not fear. We’re going to get everyone nice and friendly and partying together. Walt has a family. Bryan has a kick-ass beard. I have partying skills. Trust me on this.

I leave you with this – The Fab Cafe Leeds tour poster.  It bears mentioning that these posters were plucked from my notes and made a (better) reality by Aaron Radzwilowicz, the same mad genius who put music to Walt’s beautiful song for his wife. Clearly, Aaron does superior work so if you need a graphics guy, hit him up here. 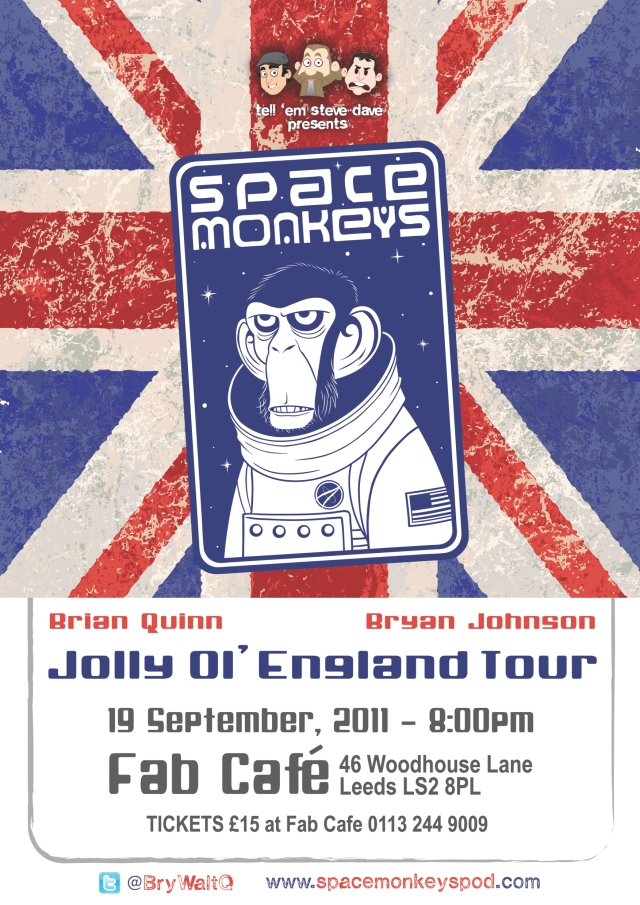 Come One, Come All

We tell 'em. It's what we do. It's ALL we do.
View all posts by tellemsd →
This entry was posted in Uncategorized. Bookmark the permalink.